The 2016 Infusion Therapy Standards recommend the use of an Engineered Stabilization Device (ESD) to actively secure PICC/Central catheters as inadequate stabilization can cause inadvertent dislodgement and complications requiring premature removal of the catheter. The standard also recommends avoiding the use of tape or sutures as they are not an effective alternative to an ESD.  Unlike passive tape-based securement devices, Clik-FIX features active mechanical securement of the catheter. Engineered to be stronger, Clik-FIX will help prevent catheter movement, tip migration, and dislodgement.

Starboard Medical’s Clik-FIX Catheter Securement Device makes securing a PICC or Central catheter easy.  Clik-FIX is a universal device designed to secure most PICC and Central catheters with an active dual locking mechanism.  When it comes to catheter securement, the method of securement can have a direct impact on catheter complications, functionality, and dwell time. Clik-FIX is an effective alternative to sutures, tape, tape-based stabilization, and other securement systems. 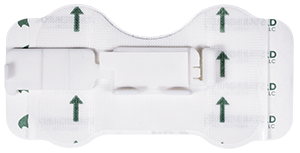 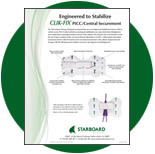 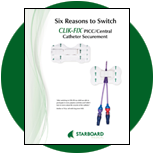 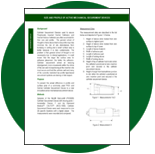 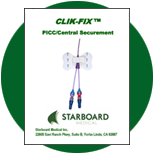 CLIK-FIX Directions For Use Card