Am I in the Twilight Zone?

Home/Blog/Am I in the Twilight Zone?
Previous

Am I in the Twilight Zone?

Nurses, don’t apologize for having to use pre-21st century types of supplies for IV insertions – it’s not 1984. Ask your facility for better supplies, remind them of best practice recommendations, and help them and you do better for your patients.

Was it 2021 or 1984? That’s what I was wondering as I sat in pre-op holding, waiting to get my peripheral IV started. My first pre-op nurse had two unsuccessful insertion attempts on my left hand. Each time she prepped my skin with an alcohol prep pad and numbed me with an intradermal lidocaine injection.

Finally, another nurse was called and like the first nurse, she tore five small strips of non-sterile tape and stuck them directly to my bedding. Separately, she had the other components necessary for the insertion which were also just placed on the non-sterile blanket that lay on top of me. These included a packaged peripheral IV catheter with the top of the packaging slightly opened, a lidocaine syringe and needle with the needle capped, an unpackaged primed extension set attached to a primed IV line, non-sterile gauze, a tourniquet, and an alcohol prep pad. All of these items were just loosely placed on the hospital blanket that lay on top of me. All of these items became non-sterile once they touched my blanket, which goes against standards.

The alcohol pad was used to clean my hand. It was a brief swab over my skin surface without allowing time for the alcohol to dry. Right after my skin was disinfected, that same gloved hand that had just torn all the non-sterile tape from the non-sterile tape roll began to palpate the disinfected area to find a vein. A vein was found, an intradermal lidocaine injection was placed, and then the IV was inserted, connected to the extension set, and secured using all the non-sterile tape that was previously stuck to my bedding. It is well known that non-sterile tape is a breeding ground for infection, yet it is still commonly used. One good thing was that the nurse did recognize that IV hubs can cause pressure points and injury, so she did cushion the IV hub with gauze. However, the gauze was also non-sterile and had been laying on my bedding. 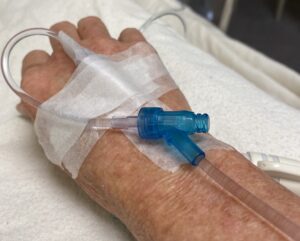 When I asked if they used securement devices, the answer was that their surgery center was just bought out by new owners that were bean counters and many things were changed to reduce supply costs. She apologized for the lack of 21st-century supplies. When I asked why the hand instead of the forearm, she said they always use the hand – it’s not their protocol to use another spot unless they can’t get the IV started. When I asked if they had ever thought about using a vein viewing device or ultrasound, one of the best ways to improve IV starts, she said, no way! They would never look at something like that there. Across the street at the hospital, maybe!

I wondered… Am I in the twilight zone? I am in 1984 and not 2021? But then I realized that this type of peripheral IV insertion and care still exist today in many hospitals and surgery centers around the globe. Despite there being multiple guidelines, recommendations, and research to recommend best practices, it seems that in some facilities, the beans are more important than the patient. However, it really doesn’t have to be that way. Oftentimes, the practices and products used to save dollars actually end up costing more!

Think about it – two lidocaine syringes and two peripheral IVs were wasted because they couldn’t get a good stick on me, and I’m just one patient. Now think about all the other patients that this happens to. All of the separate non-sterile components could instead be packaged together in a sterile kit with proper securement for not much more than what they are paying currently, for both the various components and the nurses’ time to grab all the separate pieces. Plus, a sterile kit helps to significantly reduce the contamination risk and helps to maintain compliance with best practices. Peripheral IV’s are known to fail. In fact, 46% of the time they do. They also are known to result in complications. When compliance with best practices are weak, complications such as infiltration, extravasation, phlebitis and CRBSI may occur, and this can result in costs that would far outweigh the minimal supply cost savings seen from choosing outdated methods. For example, one CRBSI costs an average of $33,000 to $75,000. The bean counters may think they are saving pennies by avoiding newer technology such as vein viewers, CHG, dressings, and securement devices, but in reality, they are putting their facilities and patients at risk.

Best practices enhance patient care and caregiver efficiency. They are well-researched and backed by evidence. Nurses, don’t apologize to your patients for the lack of supplies that your facility has. Instead, ask your facility to bring in the proper supplies. In the long run, best practices and recommended products enhance patient care, improve outcomes, save time, money, and lives.

About the Author: Kerry Edgar